Parallel Collisions: 12th Adelaide Biennial of Australian Art is anchored in the expressive and frustrating conceptualisation of time. The exhibition explores the temporality of the contemporary, how ideas emerge, converge and re-form over time, echoing throughout history to reveal points of similarity (parallel), contact (collision) and encounter (trespass).

Parallel Collisions proposes multiple and paradoxical histories: a burgeoning set of coordinates to map out the multifarious conditions of the contemporary. We invoke Walter Benjamin’s idea that moments of the past can be blasted out of the ‘continuum of history’ and reinterpreted and reinvigorated to build a new future.1

We also ask ourselves the question: What happens when the artwork leaves the author and gains its own momentum and identity in space and time, traveling with impunity beyond the reach of origin or intention?

Ern Malley is one of Australia’s most famous poets yet he is a creation of fiction, or, more accurately, satire. With its roots in Adelaide, it was the Ern Malley fabrication that provided a departure point for the evolution of Parallel Collisions. The greatest Australian modernist hoax is Malley’s story and the notion of the ‘black swan of trespass on alien waters’ is richly represented in the collection of the Art Gallery of South Australia. From this initial research we stole the idea of trespass but did away with the black swan. The Ern Malley as prompt is not something we have emphasised publicly, however, for this edition of Das Superpaper we believe it is a rich vein through which the works of the artists and writers included can be contextualised.

In this issue the three conversations facilitated between artists and curators – Tom Nicholson and Anneke Jaspers, Nicholas Folland and Lisa Slade, Susan Jacobs and Pip Wallis – meander through time and place. They riff on the parallels and collisions through which history and the archive and collections dovetail into speculation, fiction and the unmonumental. Robert Cook vs Max Pam is a collaboration undertaken for the biennial and in this conversation our protagonists are disarmingly candid about the ways in which they negotiate their practices.

The five pictorial features highlight new and existing images from Pat Brassington, Marco Fusinato, Rob McLeish, Tim Silver and Michelle Ussher. These works shiver, disintegrate or amass material to create a rich mosaic of interlocking temporalities that explore our subjective experience of time. Christos Tsiolkas has offered a story that sits ambiguously between fact and fiction, its depth of research and evidence is a decoy, deliberately misleading the viewer into an assumption that fiction is fact.
—Natasha Bullock & Alexie Glass-Kantor

Watch the series of videos interviews on
Parallel Collisions: 12th Adelaide Biennial of Australian Art
that we co-produced  with The Art Gallery of South Australia. 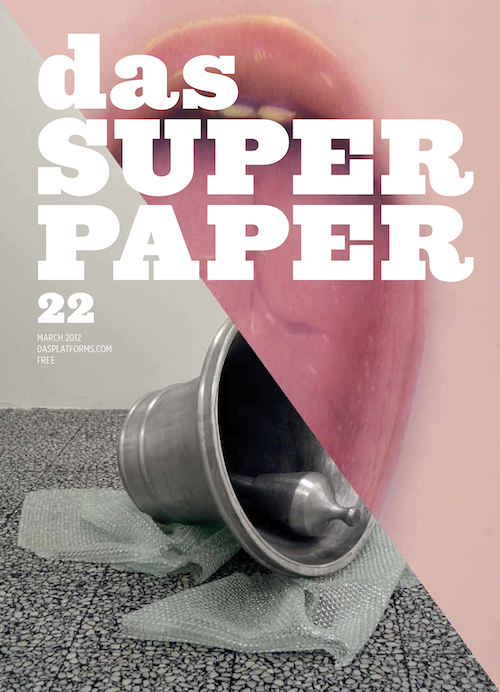