RE: Performance and what we spoke about on the last day on earth.

“We must experiment with ways beyond objects.” Hans Ulrich Obrist

Performance has a long and rich history within the visual arts, from early 20th century movements like Futurism, Dada, and Bauhaus, to the Happenings, ‘actions’ and Fluxus movement of the 1960s and 70s.

We are currently witnessing an extraordinary resurgence in the popularity of performance art. The medium has moved from the margins to the centre of contemporary visual art discourse. Recent years have seen performance art being embraced with unprecedented confidence and major institutions have reflected this by presenting shows of mass appeal such as Marina Abramović’s The Artist is Present exhibited at MOMA, Tino Sehgal’s This Progress at the Guggenheim Museum, the Tate Modern’s new Tanks programming, and locally with the next installment of 13 Rooms curated by Hans Ulrich Obrist and Klaus Biesenbach.

There is a largely undocumented history of Australian performance art, though in the last decades it has never been absent from our artist-run-spaces, theatres, carparks and galleries. Local organisations such as Performance Space and Artspace have been challenging conventional notions of performance making for the last thirty years.

The contributors to this issue of Das Superpaper met for a discussion about performance art at SuperKaleidoscope’s studio on the 21st December 2012. We talked about the character and consequences of new performance formats used by artists, curators, and institutions. It became the blueprint for this issue.

Live gestures are one of the most direct expressions you can make in art. We view this in reference to time, history, fiction, participation and collaboration. We also reflect on the recent trend of re-performance and re-enactment that questions the nature of performance art, and how best to preserve it whilst maintaining the potency of the initial physical encounter.

Over the following pages we invite you to consider why performance art is being adopted with such frequency by new generations of artists, and why at this moment, audiences are demanding participation and such an undeviating engagement with their art?
—SuperKaleidoscope (Sarah Mosca & Kim Fasher) 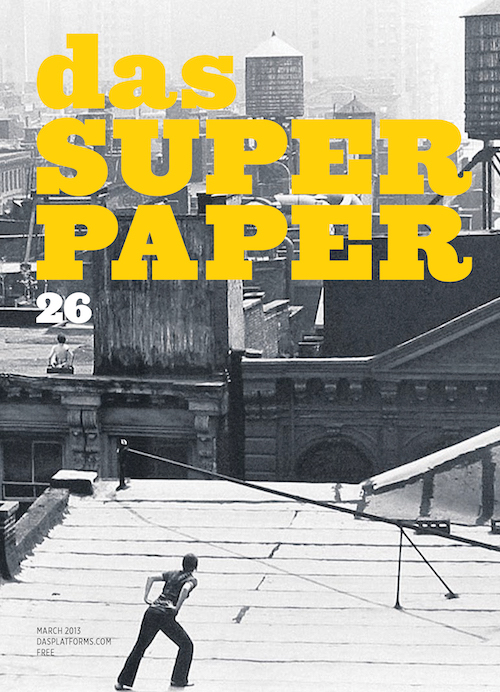