In recent years, there has been a renewed interest in the relationship between art and politics, with several key texts published on the subject and major exhibitions, festivals and biennales addressing the issue. Much has been written on the topic, with critics for the most part lining up on two opposing sides; on the one hand we have those commentators critical of “activist art”, scathing of its apparent lack of aesthetic consideration, and on the other we have those who advocate socially-engaged, relational or participatory art practices as a means to challenge existing social norms. This issue of Das Superpaper could be considered a propositional publication, navigating the terrain between and around these competing positions. Most of the artists featured in this issue would not consider themselves to be activist artists – with a few notable exceptions – but nevertheless their work encourages political analysis.

What connects these artists is their engagement with the body as a site of encounter, whether this is through bodies on display or through implied bodies (either within the artwork or those of the audience). Many of the selected works address the politics of representation, directly exploring how artists engage with questions of gender, sexuality and race; markers of identity that are anchored in various ways to the body and which can see the body become a site of contestation. But can this kind of art effect change, in particular in relation to sexism, homophobia and racism?

Foucault has argued that it is through our bodies that we are systematically repressed. He gave the term biopower to the “set of mechanisms through which the basic biological features of the human species became the object of a political strategy, of a general strategy of power”.1 Biopower is a technology of power that facilitates the management and control of populations through a range of disciplinary institutions which foster normalisation, such as schools, hospitals, prisons and the defence force. This kind of normalisation perpetuates the divisions and prejudices in society, such as sexism, racism and homophobia. The artists in this edition all pose a challenge to this method of control by challenging the tropes of this normalisation.

The artists have used a range of methodologies to challenge this normalisation of the body, this biopower, ranging from the humorous to the confronting, the absurd to the poignant, and many permutations in between. Kate Britton looks at the “ethico-political” work of Santiago Sierra as a form of “territorial realism”, where an aesthetic formalism is overlaid on real bodies and real situations. The exploited and territorialised bodies in Sierra’s work come uncomfortably close to the various forms of exploitation that exists under capitalism, piercing the anaesthetised, pristine space of the white cube and confronting the viewer. Marco Fusinato’s recent works often rely on audience discomfort, but rather than territorialising the bodies of his paid subjects, Fusinato’s works implicate the bodies of the audience in an immersive spectacle that demands a corporeal response. Fusinato’s earlier work commented on the politics of resistance through an active engagement with anarchist politics, but as Michael Ashcroft notes, late capitalism has come to cater for individual self-expression and creativity in a way that integrates the goals of revolutionary movements, sanitising and repackaging resistance as a consumable product and increasing the challenge to avoid artistic co-option. Kate Mitchell’s practice reminds us of the relationship between art, bodies and work and the absurdity and futility of artistic labour under our current economic system. As a woman performing repetitive work tasks, one can’t help but think of the role gender plays in conceptions of labour when witnessing Mitchell’s work. Several other articles address the politics of gender within contemporary artistic practice, including Clare Rae’s article on the recent exhibition Backflip: Feminism and Humour in Contemporary Art at VCA Margaret Lawrence Gallery; Deborah Kelly’s anthropomorphic challenges to the gendered body; and Tess Maunder’s article on the professional development needs of women artists and arts workers. In a related manner, The Kingpins and Leigh Bowery challenge expectations of gender and corporeal totality through performance and the subversive nature of altered bodies. Nic Tammens’ piece on the agit-femme art rock group Pussy Riot is perhaps the most overtly political article in this edition, highlighting how a conservative state can reassert its identity through the oppression of an avant-garde feminist group. Other artists like Eugenia Lim and Paul Knight take a quieter look at the body and social engagement, investigating the relationship between intimacy, the body and the everyday in the contemporary moment. While Knight’s practice involves a vernacular look at queer intimacy, Paul Yore’s work is a kaleidoscopic paean to experimental sexualities and uninhibited play. Yore recommends the use of psychotropic substances as a methodology for the reimagining of self, which is arguably reflected in his playful, psychedelic, decidedly queer works. Richard Bell’s practice also employs a playful humour, albeit in a more antagonistic way. Bell contests the historical (and persisting) injustices against Aboriginal Australians and the contemporary prejudices held about them. Kelly Fliedner discusses his distinctive use of abrasive humour to highlight the oppression of Aboriginal people. Yhonnie Scarce also creates confronting works about Aboriginal history, but instead of humour Scarce uses a seductive aesthetic to draw in the viewer to her fine blown glass works. Her works confront such important historical issues as the stolen generation, Aboriginal deaths in custody and the colonisation of Australia. Christian Thompson also engages with historical material relating to colonisation, with his recent series We Bury Our Own enacting a form of “spirit repatriation” by creating works in response to the archive of photographs of Aboriginal Australians dating back to the mid-nineteenth century in the collection of the Pitts River Museum in Oxford, UK. Finally, Helen Johnson’s work investigates the body and identity through figural painting. In her most recent series she has shunned her usual subject matter in favour of paintings of islands, which serve not as the tropical paradise they promise to be, but as a “repository of Australian shame… the place where Tasmanian colonists sent Indigenous Tasmanians to perish, the place where we indefinitely detain asylum seekers”.

In considering the range of works included in this issue, I must say that I agree with Paul Yore when he states – and I’m paraphrasing – that when restricted to an institutional or gallery context, artists can merely comment on pressing socio-historical concerns. Controversial though it may be to some to make such a suggestion, art is not a substitute for political action. Art will not overthrow a corrupt system. Art will not liberate an oppressed people. But art exists in a dialectical relationship to society. The art of the day is therefore a reflection of the dominant culture at the time and a force influencing the dominant culture. It is through discourse then that these influences can be felt and thus through discourse and engagement that artists can hope to highlight, challenge and reflect the exploitative, oppressive and discriminatory aspects of our culture. This issue of Das Superpaper highlights the various methodologies that a selection of artists attempting to resist the status quo use. It is neither encyclopaedic nor a cross-section of current practices. Instead of a destination this edition is another beginning in the discourse around the politics of contemporary art practice involving the body, one hopefully pointing in an outward direction.
—Drew Pettifer 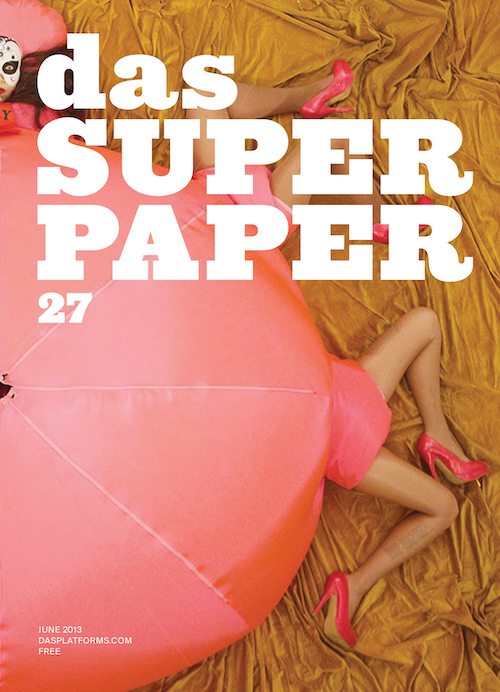