Western Sydey: a portrait of a place

In 2005 I spent a year living in Italy, staying at my great uncle’s house. He ran the Laurus Robuffo publishing house and was quite wealthy. I slept in the room where Mussolini learnt fencing, bathed in the ground’s Olympic swimming pool and had my own Roman Holiday affair with the family dachshund. After all this indulgence, I wasn’t looking forward to coming back home.

Home is Western Sydney, where I have lived all my life.

When I arrived back, I became aware of Parramatta Artists Studios, which was co-ordinated at the time by Michael Dagostino: the ‘art dad’ to a generation of Western Sydney artists. Fairly soon I had a studio myself and made friends with artists that came from “out west” too. I began to discover Western Sydney on a deeper plane, and met mentors who had already figured out its tracks.

Talking about Western Sydney can feel tiresome at times, especially when funding comes into conversation (arts funding bodies often require organisations to run programs out west). “Rough. Cultural wasteland. A place people don’t go (unless they have to find ingredients for an exotic dinner). Too many people.” All things I have heard when the west is brought up. When approaching this edition of Das Superpaper I wanted to go beyond those familiar stereotypes and instead focus on what I find truly exciting about Western Sydney. Das, being a responsive format set in the now was perfect to address the topic.

All across Australia similar social and economic landscapes sprawl inland from the coast, from the western suburbs of Sydney to the eastern suburbs of Perth. Transport is particularly significant to Sydney’s extensively spread out west. There are always adventures to be had on the T-80, the governmentfunded bus from which Tom Polo took inspiration for his addition to Das. Polo has used the T-80’s carpeted seat patterns and phrases overheard in conversations on the journey. There is Elizabeth who, willed by God, shakes people’s hands on trains from Ashfield to Campbelltown after her nightshift. JD Reforma has found another way to get around: an epic swimming pool saga, starting at Ingleburn and ending on the other side of Sydney to see how the other half live.

This issue of Das features a section dedicated to presenting new works by artists from Western Sydney, including Justene Williams reflecting on her dance eisteddfod days, Heath Franco’s heavily mascaraed man in what appears to be a grocery catalogue, Paris and Tacky morphing into madcap decoupagists, and Regina Walter taking a break with the smoking women of Stockland Wetherill Park. Elsewhere in the magazine, Giselle Stanborough and Alana Dimou take us on a two-day Big Mac eating extravaganza, and we learn about future project Funpark, which shares Mt Druitt’s fascination with themeparks.

Thank you to Anne Loxley who generously mentored me through this process and the Das team for making it all happen. 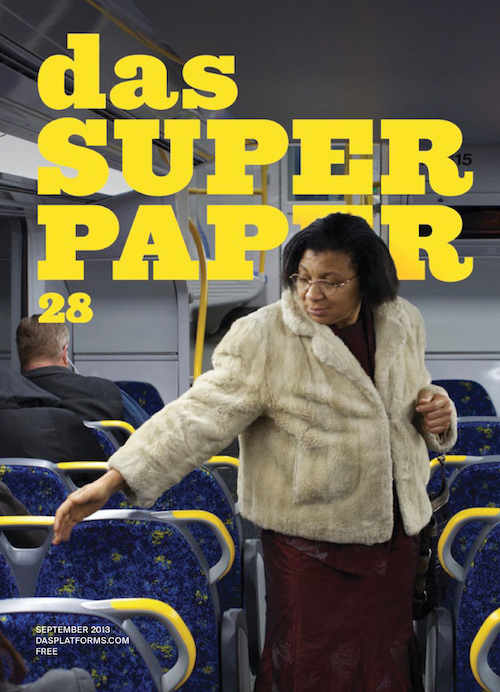