The importance of not doing as you say

In Colorado there’s a woman who runs and can’t get exhausted. In 1997, she underwent a partial right-temporal lobectomy to correct the epileptic seizures she experienced daily. The seizures and surgery have short-circuited that part of her brain assigned to sense the passage of time. As a result she has become a champion ultramarathon runner, unfazed by the oppressive awareness of how long she has been running.

In the visual arts industry, making and communicating ideas can end up seeming very much like multi-tasking and marketing products. One hopes not to produce only more ‘content’ for the contemporary art machine, which either runs off, or produces, publicity (even more so than objects now) in the service of capital.

In such a context – symptomatic of an overly corporatised society and its values of service and high-performance – we seem increasingly prepared to reproduce and internalise these conditions: artists play at being entrepreneurs and marketing agents while critics and curators perpetuate a marketing paradox that puts any enunciation to work as positive exposure to satisfy funding bodies and stakeholder interests.

Subversion might be, if we are not careful, the sweetener that makes it easier for us to run faster, harder. It seems that all moves are funnelled toward productiveness by invisible variants of the human resources department (the most nauseating of word combinations) and worker ‘support’ strategies (read: peptides). The office chair is more ergonomic, although not for your comfort.

How to be hopeful that we can become what is not required of us?

In his essay ‘Exhaustion and Exuberance’, Jan Verwoert asks how we might ‘effectively interrupt the self-contained economic cycle of supply and demand and truly break the spell of the pressure to produce for the sake of production.’1 He goes on; ‘[A] dedication to imagining other ways to perform and other ways to enjoy consumption means claiming the imagination and the aesthetic experience as a field of collective agency where workable forms of resistance can be devised.’

With this in mind, the texts and artist pages here move away from the pre-determined functions of contemporary art criticism to self-consciously consider their own form: that of the magazine. We have also considered how the magazine itself functions as a proposition to embody a critique of the production, framing and dissemination of creative activity.

The issue is both a proposal for and an experiment in shapeshifting, drawing attention to ways in which contemporary creative work fulfils predetermined requirements, considering models of alternative institutions and looking to strategies of inefficiency, unspeakability and withdrawal as workable forms of resistance.

To this extent, the recent events of the Biennale of Sydney Boycott have similarly played a part in our discussions for this issue. The BoS Working Group’s strategies of refusal and divestment were proposed as affirmative action toward actual improvement of refugee policy and treatment in Australia.

Although inactivity is effectively forbidden today, the refusal to work, as in Lee Lozano’s work, can embody useful and positive action. The demands of some unwieldy organisations raise the question: who is working for whom? Organisations, and indeed individuals, might look at reducing operations or slowing production as a means to align the ways in which they function with their ideologies and to manage their own accountability.

Divergence and contrariness are possible modes for relating to the contemporary art machine. Happily, a multiplicity of modes is at play since a few spanners in the cogs gives us time to look closely at the pieces.

The trajectory through this space of real political and lived conditions is the long haul; luckily exhaustion is guaranteed.
—Brooke Babington, Liang Luscombe, and Pip Wallis

1. Jan Verwoert, ‘Exhaustion and Exuberance’ in Tell Me What You Want, What You Really, Really Want, Sternberg Press, Berlin, 2010 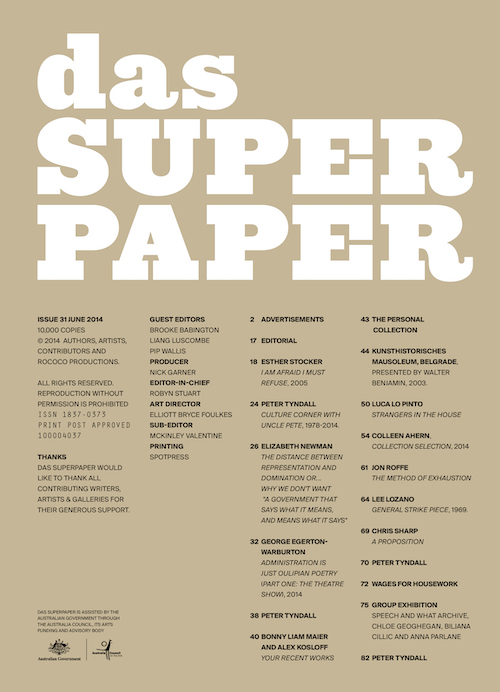